Some of our clients are keen to tell you about their experiences of weight loss surgery with The Bariatric Group. Click on their photos below to read their full story.

Disclaimer: Please note that weight loss surgery results and benefits are unique to each individual and in such The Bariatric Group cannot guarantee specific weight loss goals as results for each surgery can vary. If you have any questions or would like to know more about weight loss surgery please contact our expert team.

Since my Gastric Band I have so much energy!

My life is a changing journey it has taken me almost three years. With help from all at The Bariatric Group in Taunton. Special mention to Jane for her support at all our meetings, my advice is be ready for life style changes. Enjoy the little things you can eat, it is not the end of the world not filling up your plate to overload. Being mentally in the right place makes you realise I takes time. I am now 60 and weigh the same as I did when I was 24 years old. To sit with my GP and him say you are looking 20 years younger was a joy. 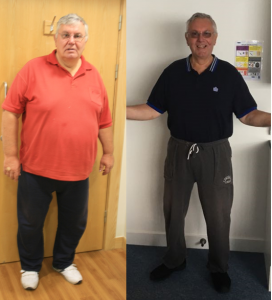 Although I was not hugely overweight (BMI 30) and had always kept my weight under control, an underactive thyroid and NAFLD has resulted in a 2 stone weight increase. I was on daily medication for stomach ulcers (caused by not eating when hungry in an attempt to lose weight. Reflux medication (hernia) and was pre-diabetic. Whilst the fitting of my gastric band, my hernia was repaired. The operation was not straightforward due to the size of my liver, but I recovered well.

One year on and I am on no medication at all for my stomach, I am no longer diabetic and my liver is recovering. I eat guilt free for the first time since I was a teenager. Bariatric surgery is not only for the morbidly obese, but it has also changed my life and my health when nothing else could. I still “make the right food choices”, which some would consider dieting, but before surgery, I was doing this and I was constantly hungry and gaining weight. Best decision of my life!

Forever grateful to Mr. Welbourn, Ali and the team.

After my pre op weigh in, I weighted 22 stone and with only being 5ft tall I was told I should lose 9 stone with the sleeve gastrectomy. I am now 11st 11lbs and still losing, I feel so much better in myself especially my confidence. I was size 24-26 and I am now size 10-12. The Bariatric Group and the Nuffield were amazing, staff were friendly and I was well looked after and everything went so smoothly. I can’t not thank you all enough – My life is amazing!

I was 76 years old, felt depressed and miserable and I had to have two knee replacements as I could hardly walk. This surgery has given me back my life and I cannot thank Mr Richard Welbourn and this team enough. I feel so well, happy, and hoping for a long and active life now.

Disclaimer: Please note that weight loss surgery results and benefits are unique to each individual and in such The Bariatric Group cannot guarantee specific weight loss goals as results for each surgery can vary. If you have any questions or would like to know more about weight loss surgery please contact our expert team.

10 years ago, my weight was a BIG issue. I had been battling with my obesity for over a decade and it had spiralled out of control. I was wearing size 26, was on medication for heart burn, my knees ached and crunched. I was lethargic, depressed and miserable.

I then made a decision to have a Gastric Band and literally my life changed. Within the first year after surgery, I was wearing a size 16 and I felt like a new person. My band gave me control back. I was able to come off my medication and I even started cycling! Life became easier…and better.

Fast forward 9 happy years.
My life with my band was then becoming more difficult. I noticed that my diet had become quite restrictive and I was always standing up to eat. An x-ray showed that my band was far too tight and overly restricted. The reason I was standing up to eat was because my muscles in my oesophagus had stopped working and the food was only going down due to gravity. My band was then emptied to resolve this and I promptly gained 1 stone! My snoring also returned.

I then made the decision to have my Gastric Band removed and have a revision to a Gastric Bypass. I had always secretly known that a Gastric Bypass was more suitable for me, as I have a sweet tooth and a passion for cheese and wine. So I went ahead and had my operation at the end of March in 2015.

The first two months post-op were quite difficult. I made a few errors with my food choices, but I lived and learned. My diet is far more varied now. I eat what my family eat, but in a smaller portion. I do avoid chocolate, cheese and other high fat and sugary foods, I find living with my Bypass much easier than it was with a Band.

I have lost over 5 stone since I had my surgery, I am now in a size 10. I have found it hard to adjust to my body, I sometimes don’t recognise myself. I do have some loose skin now (as overall I am over 9 stone lighter), but I accept this as a side effect of weight loss. I feel so much better now. I have more energy and a zest for life. Getting dressed is easy – I don’t have to think as much about what I wear! I just throw on a pair of jeans and feel confident in them.

The Gastric Bypass is the most invasive form of bariatric surgery, but it is the Gold Standard. Before my revisional surgery, another patient who had been through a Band to Bypass revision said to me – “Ali, it’s the difference between driving a Mini or a Ferrari”! She was right, the Gastric Bypass does give you fast results and the ride so far has been exhilarating!

Back in early 2013 I saw a picture of myself from Christmas and it hit me there and then, I really had to do something about my weight. I’d been big since my teens but over the years it had escalated and I was 26 stone! My weight loss journey has been intense, and so incredible. I could not be happier with my results. My entire life is different, and I work with my body now, not against it. I try to eat well, whilst recognising that I will still make terrible choices that don’t fit with someone who’s had a gastric bypass. After all, there is a reason I had bariatric surgery in the first place – because I really, really love food. And I still love food, I love to eat, to socialise and to try new things. Having had a gastric bypass doesn’t stop me doing any of those things, it just changes the way I do them. I feel so much healthier, happier and confident. Most days I look in the mirror, and I feel good about the way I look, and I know I am healthier and can be a much happier person because of the weight loss. My Heaviest weight was 26 stone and now I’m 13 stone.

Before I chose the bariatric group I looked at various different options, but something about the bariatric group pulled me in. It was the team who are just incredible. Everyone is fantastic! Daisy and Ali are brilliant point of contact. They have all the answers and are genuinely interested and enthusiastic. Anne and Jane are fantastic and know exactly what they are talking about. They give me a real feeling of confidence in what they are telling me. I made great use of both of them at various times by just spilling all in exchange for some decent advice. And Mr Welbourn the surgeon. He literally helped me become half the man I used to be!

I’ve been overweight my whole life. The first visit to a dietitian was when I was 8. I was used to being the last one picked for a team. I was never the cool one as a teenager because fashion in a size 16 wasn’t cool. I resigned myself to being fat for the rest of my life.

After the birth of my son, the 4 stone I put on during pregnancy stayed and then I added to it. I tried every diet known to man. Some healthy and others unhealthy and downright dangerous. Diet pills that made me hyper. Liquid diets that made me faint.

I hide behind my misery and became the joker, the comedian. I’d joke “I was 8 stone at 8, 9 stone at 9, I’m 49 now, so in my eyes I’m underweight”, it always got a laugh. I’d lose weight and feel good but I couldn’t sustain it, I’d slip back into my old ways of comfort eating. This didn’t effect my physically whilst I was young but as I hit my 40’s I felt old. Every part of me ached in the morning before I’d even got out of bed. My back caused me so much pain, and with a bad knee too I walked like a woman double my age. So what changed?

I was diagnosed with prolapsed discs after spending a week on all fours in agony. I was also told I had arthritis and type 2 diabetes. At the same time I was given the wonderful news I was going to be a grandmother. It was then that I decided I needed to deal with my weight head on. I wasn’t happy, I wasn’t sexy and I did care when I was called fat. So after researching bariatric surgery and reading reviews of surgeons I called The Bariatric group. I spoke to Ali who couldn’t have been more inspiring. She had been through the surgery so I knew I was speaking to someone who understood. She knew how I was feeling about myself, she also knew the worries me and my family had about surgery and she instantly put me at ease. I made my decision there and then.

On the day I had my pre op assessment I topped the scales at 18st. The surgery was straight forward and I felt on top of the world the following day, my new life had begun.

Within 9 months I had halved my body weight and was wearing size 8 jeans! I never knew what thin felt like until then. More importantly, I was no longer type 2, and no longer in pain.

I have packed lots into life since then, been on zip wires, jumped on the trampoline, climbed on a climbing wall, started yoga, joined a gym, wore a bikini! And that’s only the beginning. If anyone asks me if I regret it, I tell them my only regret is not having it sooner. It has changed my life beyond recognition. I am outgoing, confident, positive and for the first time in my life I can look in the mirror and like what I see. I can’t thank Ali and her team enough for giving me a life and a healthy future with my grand children.

So many years I struggled with my weight, my initial bariatric surgery was effective short term, but came with many complications. Since having the bypass a lot of my complications have gone and my body has charged dramatically since the 2 July 2019. The care and support that I have received from all the team has been incredible.